It’s the night of December 17, 1899, one week left to the beginning of the Secular Jubilee. In the monastery of San Filippo al Marta, the 80 year old abbot Francesco, seated at his desk full of books, is absorbed in reading.
The sound of the entrance door bell brings a smile to his face. The abbot approaches the door, bringing an old volume with him.
From the darkness, exhausted by the journey along the Via Francigena, four wayfarers emerge. The Benedictine monk, happy to see them, guides them to the library, taking care not to bump into the confreres walking through the gloomy corridors of the abbey.
What hides the elderly religious, who never separates himself from that battered book whose pages are all blank?
Who are those enigmatic travelers who seem to come from different and remote eras, in addition to coming from different countries? How is it possible that, in the presence of the abbot, there are: the English archbishop Sigerico of Canterbury arrived from 990; the Castilian illiterate widow Maria Rodriguez from 1350; the noble German soldier of fortune Goetz von Berlichingen from 1550; and the wine merchant and former French revolutionary Jean Baptiste Fournier from 1825?
And why, at the same time as the travelers arrived, did the Devil appear to threaten the lives of all of them? 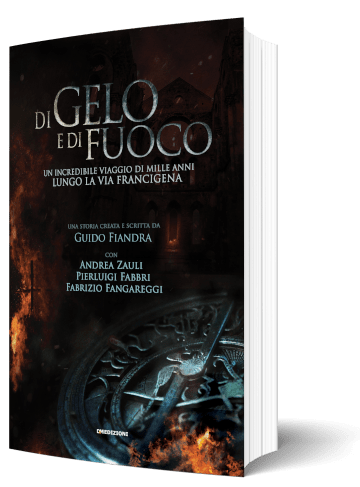 HOW THE NOVEL WAS BORN

The story of this book began fifteen years ago, when Guido Fiandra happened to find out the Sigerico’s journey and the Via Francigena and got fascinated. After having deepened the story and visited some stretches, towns and cities, he wondered why the Way of Saint James is still so popular and traveled by numerous believers and lay people, while the Via Francigena – whose religious and historical relevance is great, having been the path on which the concept of Europe has developed since the Middle Ages – is much less known and popular.

Fiandra talked about it with Andrea Zauli, Fabrizio Fangareggi and Pierluigi Fabbri, his friends and authors, proposing to leave together for a trip: writing a novel that would unfold for a millennium and set in the Francigena Strata, as it was called in the Middle Ages. The project took shape starting from an idea for the main story to which Fiandra had already begun to work.

All four together would develop the main storyline, while each of them would independently write the story of each character’s journey, differentiating it by tone and style.
What the authors were immediately attracted to was the possibility of creating a network of images and characters from different eras, symbolically illuminating each kilometer of the journey along the four countries in which it winds – England, France, Switzerland, Italy – plus the two to which it is linked – Spain and Germany – , in order to feed the mythology of this marvelous path with the invisible but huge force of the stories, between reality and fiction.
It’s with this spirit and passion, from this mythopoeic perspective, we wrote Of Frost and Fire, which we now entrust to all those who want to read it.

80 Years
Born in the Duchy of Lucca on December 9, 1819,
with the name of Tommaso Fattori

Taking the name of Francesco, Tommaso becomes a monk in the abbey of Badia a Pozzeveri, a few kilometers from his family home, where he remains for twenty years. He’s about sixty when he’s nominated prior and, at his request, transferred to the abbey of San Filippo al Marta which has a large collection of books, essential for his religious and historical studies – especially about the Middle Ages and his beloved Via Francigena – to whom he devotes most of his time, renouncing even to sleep. 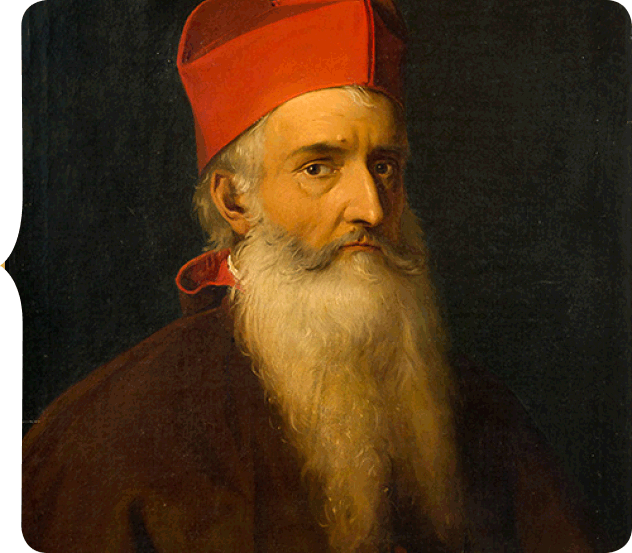 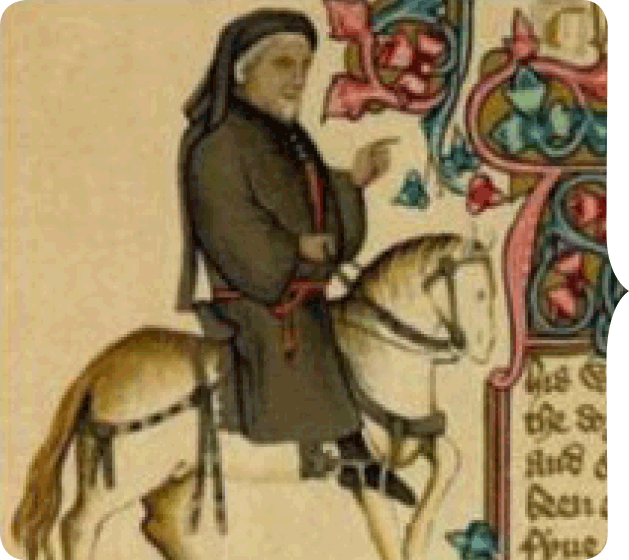 40 years
archbishop of Canterbury
born in circa 950 in Canterbury

He leaves for Rome in 990 to receive the pallium, the cloak symbol of archiepiscopal dignity that the bishops had to go to pick up personally in the Middle Ages, from the hands of the Pope, John XV. Rigorous and misogynist, Sigerico is powered by an unshakable faith both in the Word of God and in the temporal power of the Church. His polite and severe bearing, his rectitude and inflexibility, which earned him the nickname of Sigerico the Serious, conceal also a good and generous side, revealed by the sincere affection for the two young clerics who accompany him.

30 years
born in a Villabilla Jewish family, in 1320,
with the name of Rebecca Ha Bohaf

Daughter of a rabbi and an apothecary, she’s twelve when her parents are massacred during the persecutions against the Jews. Even though she is only a child, Rebecca realizes that in order to save herself she must run away and change her identity.
She reaches Burgos, the capital of Castile, where she introduces herself to people as Mary, an unfortunate Christian orphan. Years go by and the girl becomes a woman, keeping the secret of her origins from everyone, even from the priest who saved her by offering her a job as a servant; from the man who marries in church, even though she isn’t baptized; and from their three children. 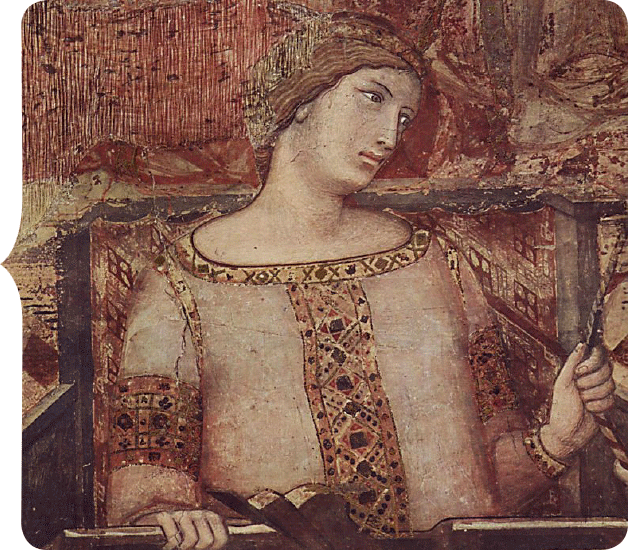 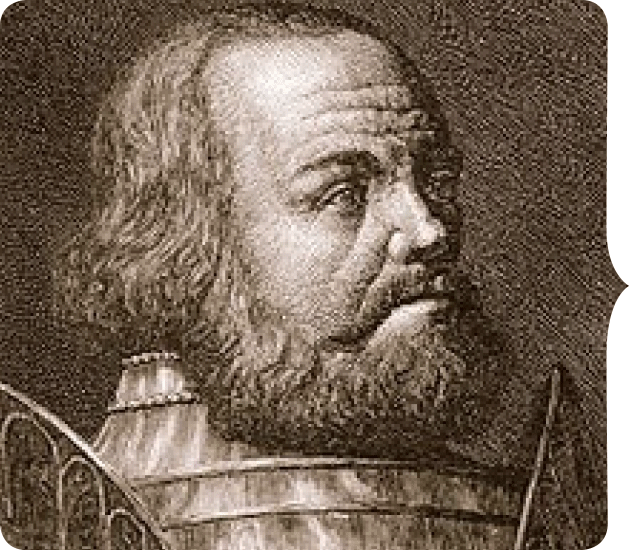 70 years
German soldier of fortune
born in the castle of Hornberg
in Berlichingen, region of Württemberg, in 1480

From an early age he is trained in the use of weapons. At eighteen, at his first battle, he wins the vice-commander’s gallons and loses his right hand.
He never stops killing since then. Over his long career as an official of royal, pontifical and mercenary armies, he fights against any enemy. Having first of all to save his life and limb and those of his soldiers, Goetz has no time to think about the soul or the existence of God, until he’s seventy: disgusted by the fratricidal conflict between German Catholics and Protestants following the publication of Martin Luther’s Ninety-five Theses, Goetz travels to the Holy Land to pacify his soul.

Son of a servant, after a childhood spent working hard for some noble parasites, he is fascinated by the revolutionary storm and at nineteen decides to fly to Paris, where he enlists the National Guard and fights on the barricades.
After the proclamation of the Republic and the beheading of the rulers, Jean Baptiste – who, in addition to libertarian sentiments, has a great business instinct – takes possession of the lands of a guillotined aristocrat: with pioneering ideas he starts to grow the vines, improves its production and quality and creates an excellent Burgundy Pinot noir, quickly becoming one of the largest producers of the Côte d’Or and, ultimately, a capitalist. 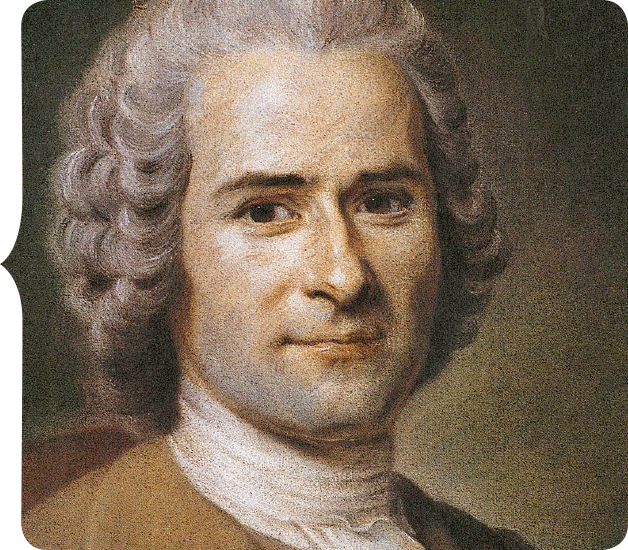 The modern Via Francigena comes from the Council of Europe and the ideals of intercultural dialogue, respect for human rights and political democracy it promotes. In 1987, two years before the fall of the Berlin Wall, the Council of Europe launched the Cultural Routes Program, a farsighted and brilliant tool to make the entire world known the history, the geography and the cultures of the European peoples. In 1994 the Via Francigena, which crosses four major countries of Europe – Italy, Switzerland, France and the United Kingdom – entered the Program and was declared a Cultural Route of the Council of Europe. And rightly so, as the words of the illustrious French historian Jacques Le Goff show: “Today we realize, if we consider reality and look carefully at History, that there is something more important than soldiers and goods passing along the roads: culture. Here it is the Via Francigena that I think can be considered, essentially, a way of culture”.

Those who travel the Via Francigena today, on foot or by bicycle with the natural rhythm of the wayfarer of the past, embracing the custom of “slow travel” back, can discover routes rich in history and traditions; can encounter monuments that still evoke the practice of pilgrimage, such as the cathedral of Fidenza; can rediscover hidden gems of architecture such as the Romanesque Pieve di Bardone, at the foot of the ancient pass of Monte Bardone (Cisa); can visit and touch shrines and relics that have attracted pilgrims for centuries, such as the mysterious and famous Holy Face venerated in the cathedral of S. Martino di Lucca, or the beautiful “majesties” (effigies of the Virgin) made of Carrara marble, placed on the houses facades along the roads of Lunigiana and Versilia.
Treasures are not only the “sacred places”, but also the numerous “profane places” such as the medieval thermal bath in Bagno Vignoni, near Siena. Or the natural Roman baths in Bagnaccio. You can still walk on the flagstones of the Roman via Cassia, emerging in the grass in Capranica, among the hazel groves, places linked to the memory of Charlemagne and the chanson de geste. Or visit the area of Baccano, near Rome.
With nature and history, the ancient infrastructure of travel also arises: granaries and fortified bridges, hospitals, post stations, cisterns, mills, ancient inns…

European Association of Via Francigena Ways

In historical reality, Sigerico, who went to Rome to receive the pallium from Pope John XV, noted the 79 stages of his itinerary coming back to Canterbury. For narrative needs, we have chosen to have him write the diary during the outward voyage. 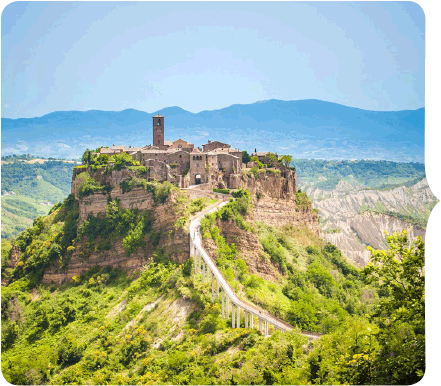 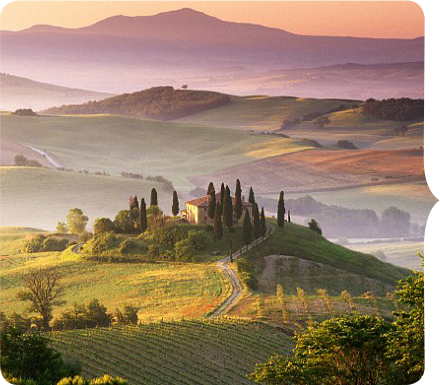 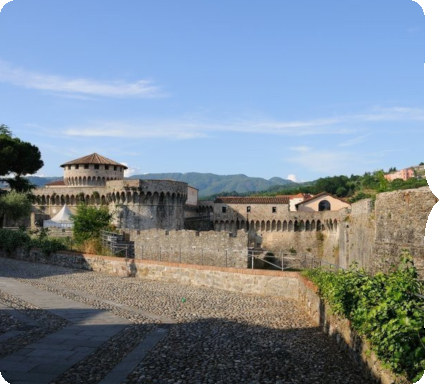 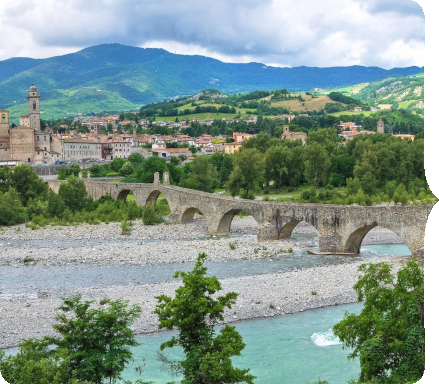 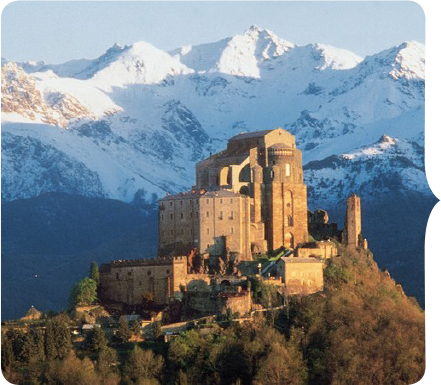 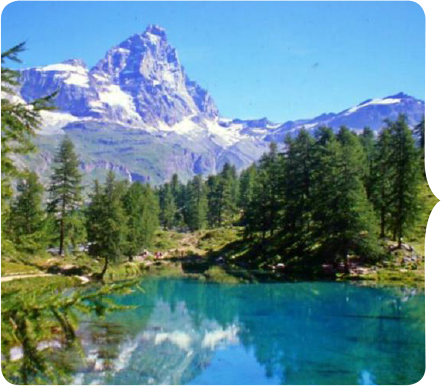 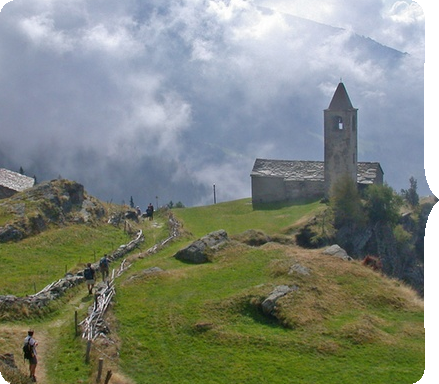 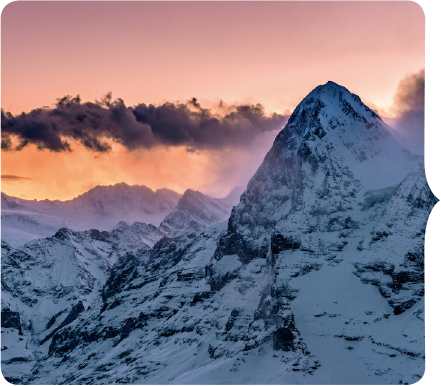 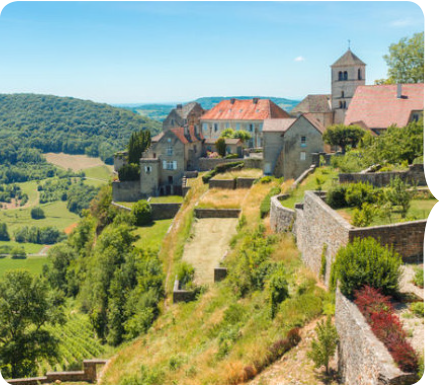 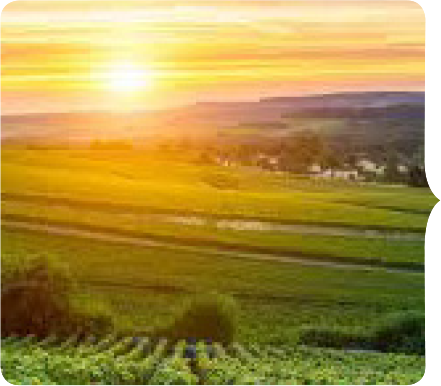 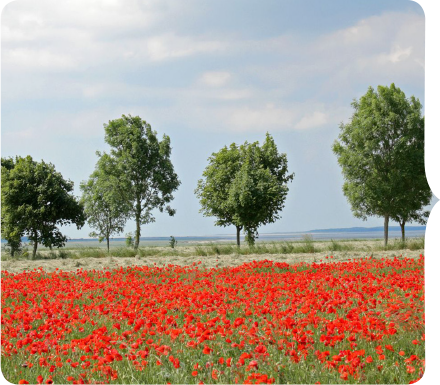 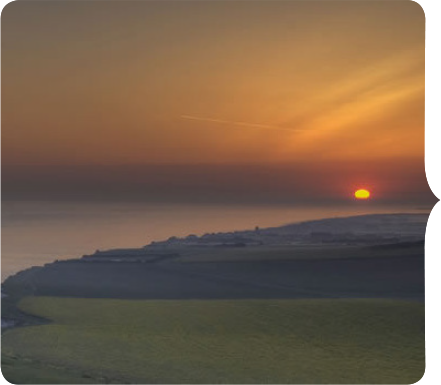 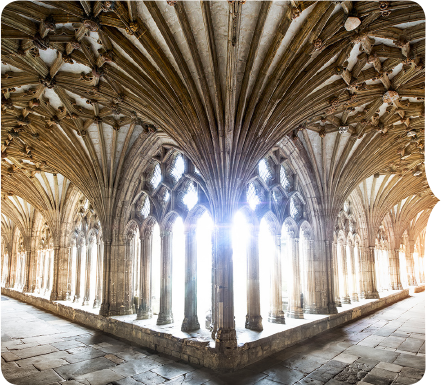 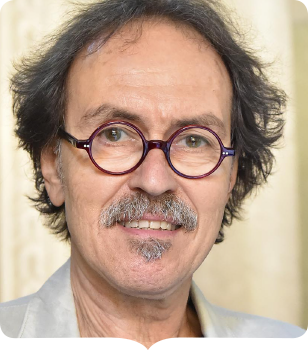 Born in Genoa in 1946, he lives and works in Rome. Director, screenwriter, television and playwright author, film teacher, over his forty-year career Guido explored many visual and narrative languages writing and/or directing numerous projects, from fiction to documentary, but also working on television programs, photography, art, drama and opera. He’s the editor of a series of film books by American professors from UCLA in Los Angeles (Dino Audino Editore) and founding member of WGI (Writers Guild Italia). Guido has been teaching Direction and Screenplay Writing at the Accademia Nazionale del Cinema in Bologna for the past two decades. 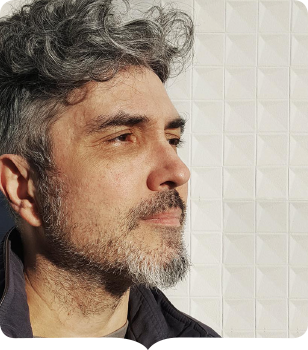 He worked as a product manager in Romagna, copywriter in Milan and screenwriter in Rome, writing for cinema and TV. Among his works are the feature film Carta Bianca, which won the Rome Independent Film Festival award for Distribution in 2013, and the Rai Uno television movie Il Paese Delle Piccole Piogge. He taught screenwriting in Cinecittà for a long time. Since the nineties, Andrea makes one drawing a day. He lives in Faenza and Rome. 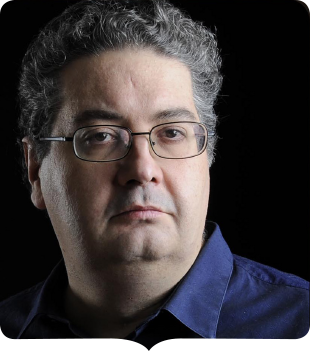 Insurer broker from Emilia, he’s passionate about history since childhood. He writes historical and fantastic stories. He was in the jury of the literary awards reWritten in 2004 and (secret) Unveiled in 2005, organized by KULT Underground/KULT Virtual Press, the second one sponsored by Edizioni Clandestine. He published the novel Il confine del buio in 2016 (David and Matthaus), written with his friend Fabrizio Fangareggi, and Il buio di York in 2018. 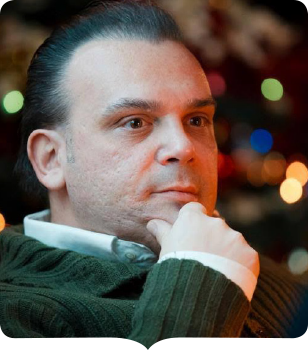 Born in Modena in 1971. Always in love with literature and cinema, he graduated in Direction and Screenplay Class from the Accademia Nazionale del Cinema in Bologna. His first novel, Ekhelon – Frammenti di Guerre Dimenticate (Nocturna, GDS Editions), won the Premio Letterario Nazionale Cittadella in 2014. He also published short stories on anthologies and magazines. He published the novel Il confine del buio in 2016 (David and Matthaus), followed by Il buio di York in 2018 and Yberros – L’ultimo soldato (Watson Edizioni).

WITH THE SUPPORT OF: